Pamir Highway is one of those roads that make the hearts of biking friends beat faster. Pamir Highway, shortly known as M41, is the main artery of life in Kirgisistan. The road was built between 1931 and 1934 for the Russian military. But its history dates back much longer to those times when it was part of the Silk Road. Opinions about where it originated (Afghanistan, Uzbekistan or Tajikistan) differ, but the highway ended exactly in the city of Osh in Kirgisistan. Our journey starts in Osh, from where we will climb up to the Pamir Plateau, and in a circle return back to Osh. The largest part of the road is above 4000 meters. Because of so many meters above sea level, Pamir Highway is ranked among the highest mountain roads of the world. 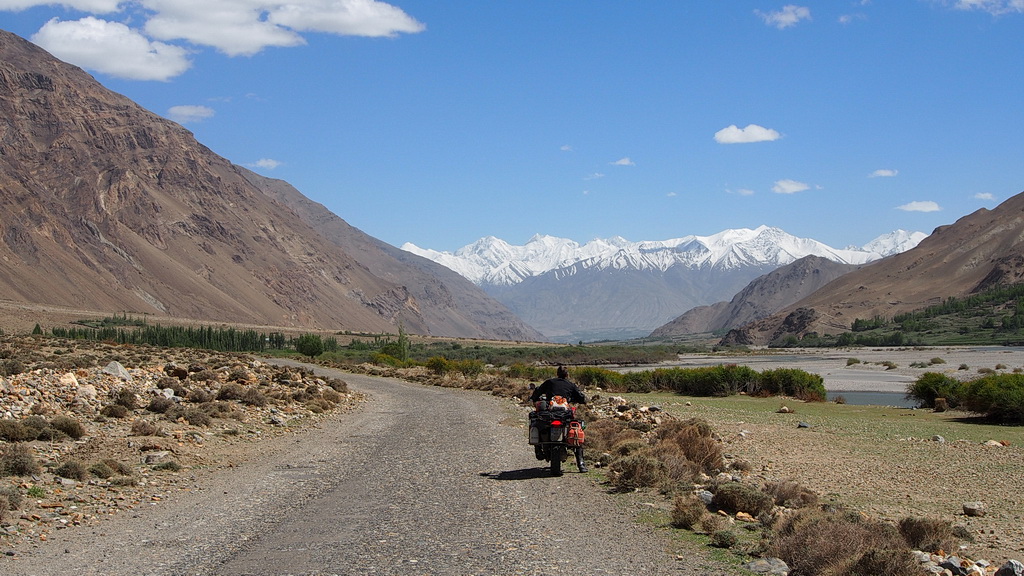 Today you get on your airplane and depart for Osh in Kirgisistan. There are two possibilities to get there, either via Moscow or via Bishkek. 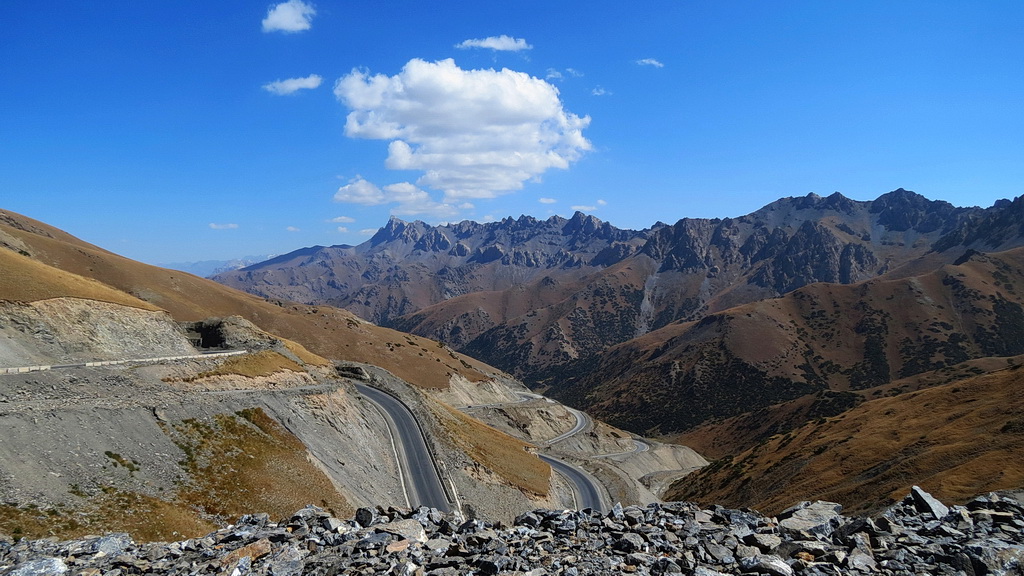 We'll pick you up at the airport in Osh and take you to the hotel. The rest of the day we will spend with a test ride, an info briefing and a tour of the city. Osh is the capital of South Kirgisistan. Its population is more conservative than the one in Bishkek. You will recognize this conservative attitude in the way people dress, in their behavior and their belief. Beyond that, only a few restaurants offer alcoholic beverages. You may visit the largest attraction of the town, "Suleiman Mountain". For Central Asian Muslims, it is a holy mountain, and it offers a breath-taking panorama view of the city. In Osh, you get a feeling for the true origins and the diversity of Central Asia. Furthermore, we will visit the market, try a real Uzbekan or Uigurian Pilaw/Plow and taste the delicious melons. 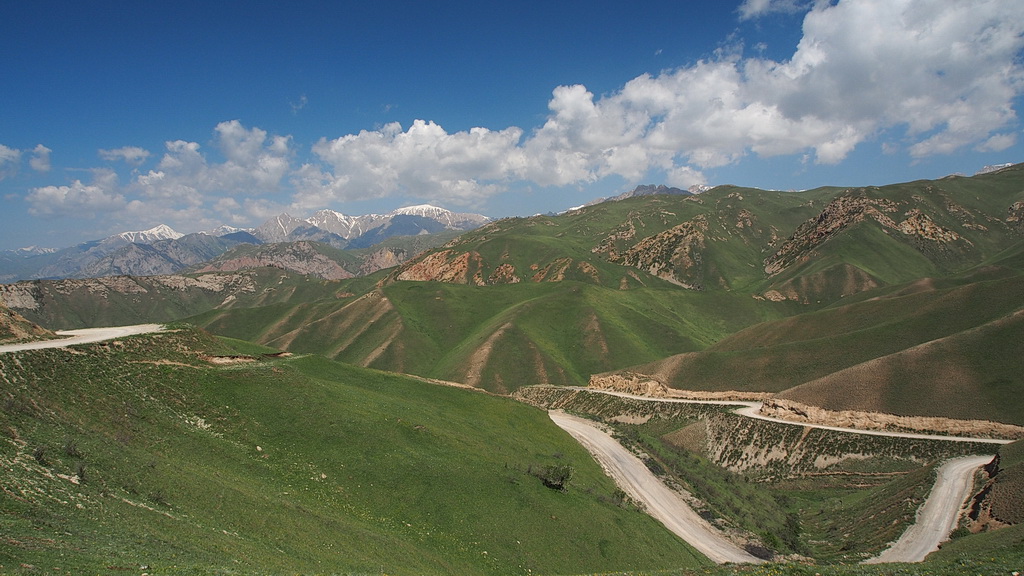 The day starts with breakfast in the hotel. When Kirgizians wish you a happy road trip, they say "ak zhol", which means "white way". Today we'll ride on asphalt. On the mountain pass Taldykb (3615 meters above sea level) you'll reach quite noticeable heights. Our goal for the day, Sary-Tash, is a village between the ridges of Pamir Highway. It is an important point on the Pamir Trak, because it is the meeting point of four roads: to the warm and plain Osh, to the Highland of Murgab, to the Tadzhik Jirga Valley and Chinese Kashgar. In the afternoon, the traditional Kirgizian camping houses 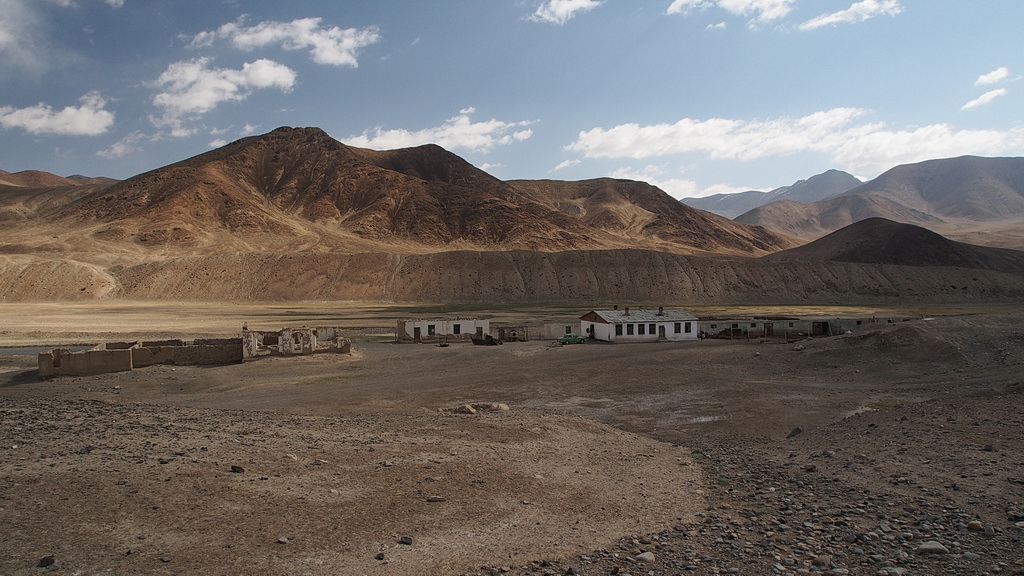 After breakfast, we ride to Tadzhikistan. Right after leaving Sary-Tash, we'll have a chance to spot the Lenin Peak (7134 meters), if the weather plays along. We'll cross the Kyzyl Pass (4280 meters). After that, there are several 10 kilometers of driving on an asphalt road up to the border with Kirgisistan and finally a 30 km ride across "no man's land".

The relaxedness of the border police and the manual handling without computers and mobile nets asks for a little more patience and time. You feel as if being once again in the 1970s. Having managed the border procedures, we'll ride across the Pamir Plateau to a real extreme, the Ak-Baital-Pass (4655 meters above sea level). The asphalt gets less and we'll find ourselves on a macadam road with inaccessibilities and all that nature has to offer. Being above 4000 meters, you might experience some oxygen problems. Be prepared, that you might feel bad or very bad, until your bodies get used to the extreme height.

By the end of the day, we will have reached the next overnight stop. Murghab, second largest city of Tadzhikistan, is in the mountains of the Eastern Pamir above 3612 meters. This is one of the most distant regions of Tadzhikistan, nearl 1000 kilometers away from Duzhanbe. Here you'll find the famous Lenina Street with its administration buildings, former Soviet military barracks, oldtimer vehicles made in Russia, monuments for the Kirgizian and Tadzhik soldiers who fell in the Second World War, a bazar and many happy and carefree children. The local climate is extreme 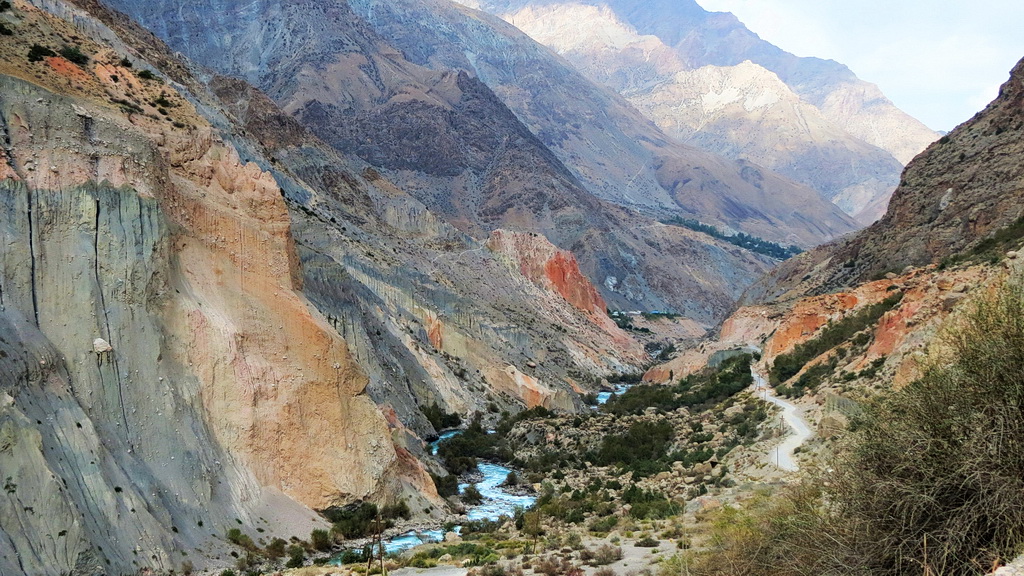 After breakfast, we continue our tip across the Pamir Plateau into the Panj-Valley along the border to Afghanistan. This is one of the wildest and loneliest parts of our adventure. The most remote regions of Tadzhikistan and Afghanistan meet here. You'll get to see slowly moving caravans on the way to the other side of the border. Such events seem like a mirage, like messengers of the long gone time of the great Silk Road. A rocky, stony road with several river crossings is waiting for us. In the afternoon, we go down from 4.000 to 2.900 meters in the Panj-Valley. It will get warmer, and finally we'll reach the village of Langar. As soon as we've arrived, we'll have time for leisure. Nearby, there are old petroglyphs (cave paintings) to look at. 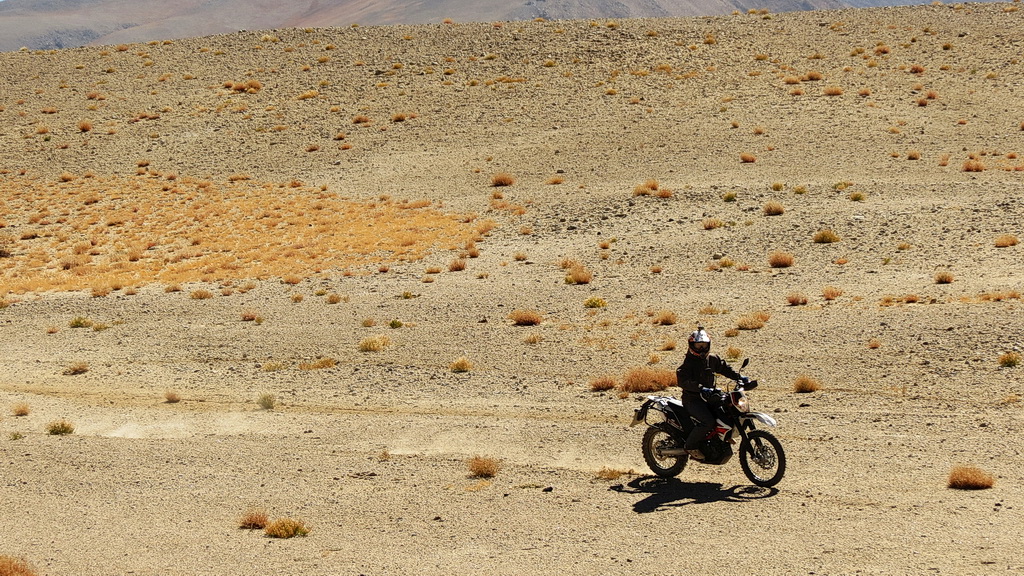 Breakfast, and back on the bikes. We'll experience the most picturesque part of the Panj Valley, the so-called Vakhan corridor. This small strip of land runs along the valleys and the rivers Panj, Pamir and Wakhan and the Afghan border. Compared to the rest of the country, the soil here is very fertile. We'll ride through traditional central Asian villages, we'll see watered fields, rows of poplars, and traditional houses at the mountain slopes. Another striking symbol of the Wakhan Valley is the Yachmun bastion. This bastion was built in the 3rd century before Christ as a protection against military attacks and to control the important trade roads from Pamir to India and Persia which led across the Panj Valley. Life on both banks of the border river is approximately equal. On one of the banks in Tadzhikistan, the village of Ischkaschim is located, and on the other bank in Afghanistan the twin village of Ischkaschim. On Saturdays, inhabitants of both twin villages meet on an island in the river and engage in trading without visas and customs. 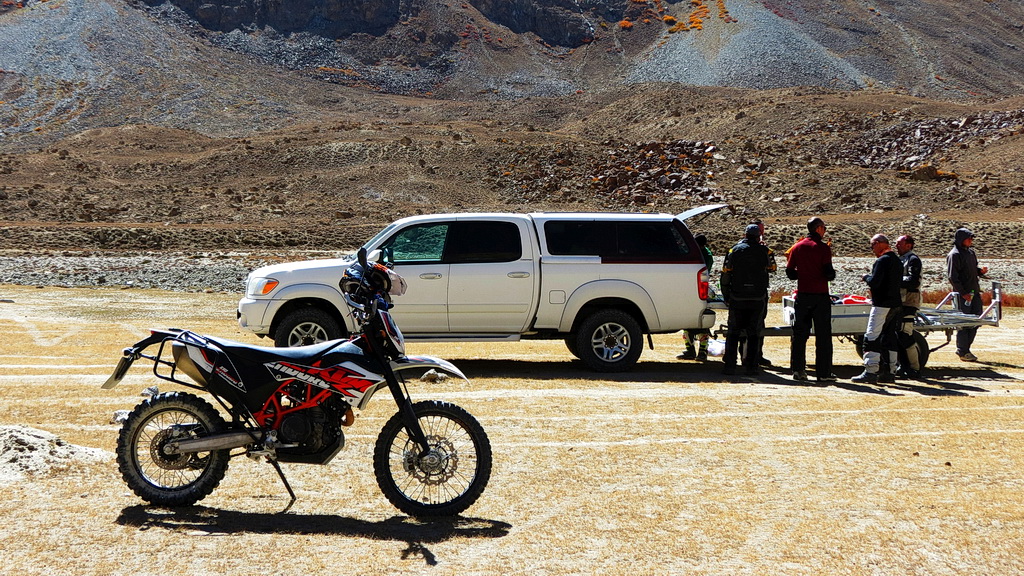 Today our breakfast is provided by a local family. Then the journey will go on. Today's target if the Autonomous Region Badakhshan with its capital Khorog. The road will lead us along many villages and apricot plantations.

Here some information about the city:

Khogor is the capital of Pamir, an island of civilization with 30.000 inhabitants, located 2200 meters above sea level. Main attraction is the botanic Alps garden. You'll find a street called Lenina, a nostalgic reminder of the Soviet area. In Khogor, the two mountain rivers Panj and Gunt flow together. There are government offices, the seat of the Tadzhik president, a university, banks and restaurants.

After we'll have checked-in and got a little fresh, we'll go to explore this city. 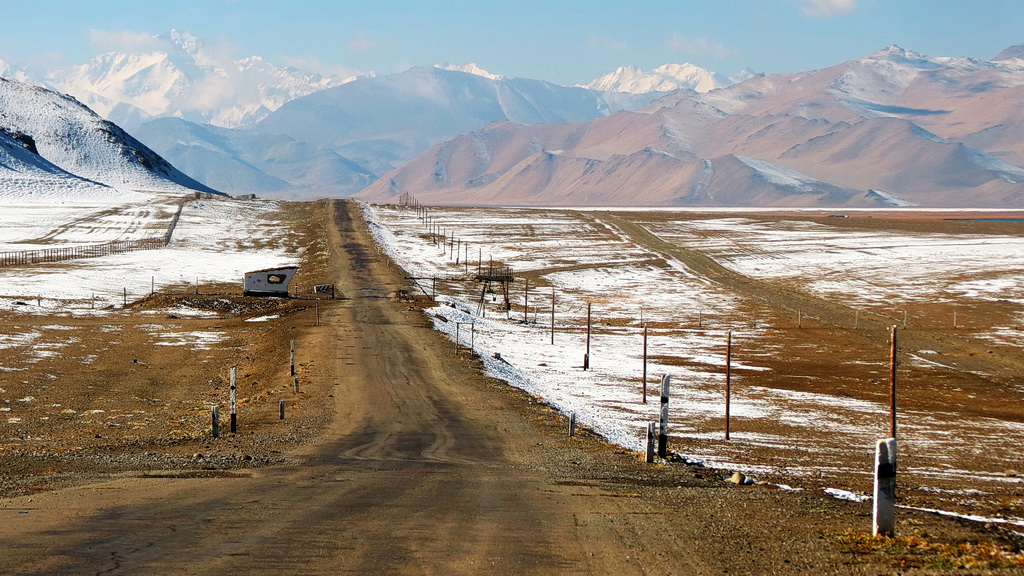 After breakfast, we'll leave civilization and move on in the direction of Bartang Valley. The beginning of the road will be easy, but the conditions will get worse and worse. As a consequence of flooding and landslide, we'll have to pass some difficult sections, but we hope that we'll be spared from that. If the road is blocked, we'll look for possibilities to drive around the blocked segments. After the strains of this day, we'll be rewarded by the visit of one of the most beautiful villages during our tour. The village Savnob is located at the edges of a deep canyon, surrounded by mighty mountains with snow-covered tops. Green blooming gardens in the village offer a pleasant contrast with the otherwise rough mountain landscape. The best view of the village you'll have from a creek nearby, which the village inhabitants use as their natural bathroom. 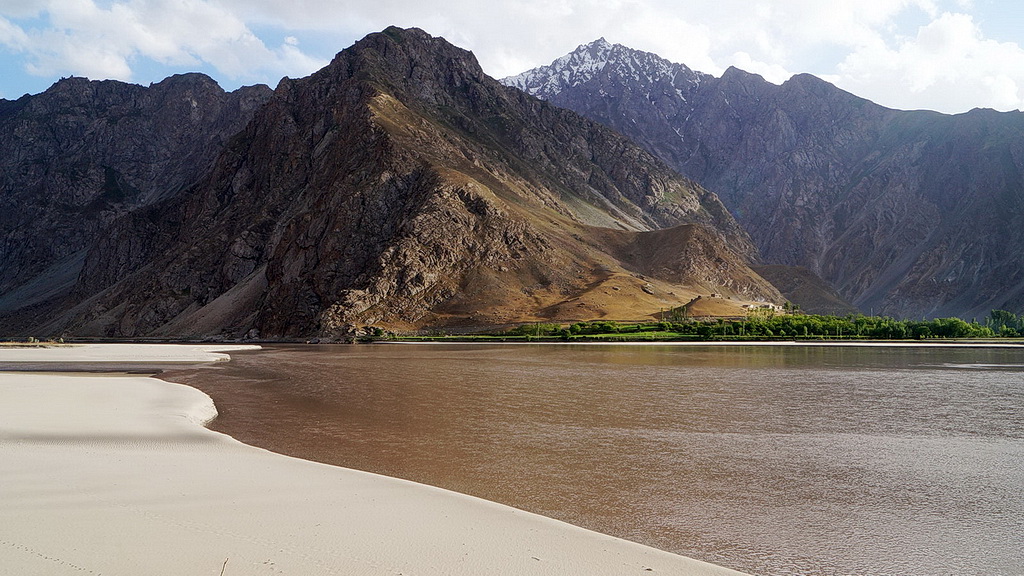 We put on our helmets, get on our motorcycles and drive off motivated! The technically most difficult day lies ahead of us. The further we go, the more demanding and exhausting the road conditions appear. After these exertions, however, we are rewarded with picturesque views of the wonderful landscape of the Bartang Valley, which we cross in the afternoon to return to the Pamir Plateau. Rough terrain awaits us here with difficult road conditions, which are quickly forgotten in the evening when you let your gaze wander over the idyllic Karakul Lake in the Tajik National Park. The lake, like the well-known Kaali lake in Saaremaa, Estonia, was created by a meteorite impact, with the only difference that the Karakul has a significantly larger area. However, due to the barren conditions, only a few creatures have settled in the lake and the only local fish species is unfortunately inedible.

We spend the night in an accommodation on the Pamir plateau, one of the world's most impressive and little explored landscapes, which has so much to offer and is particularly appreciated by motorcycle enthusiasts. 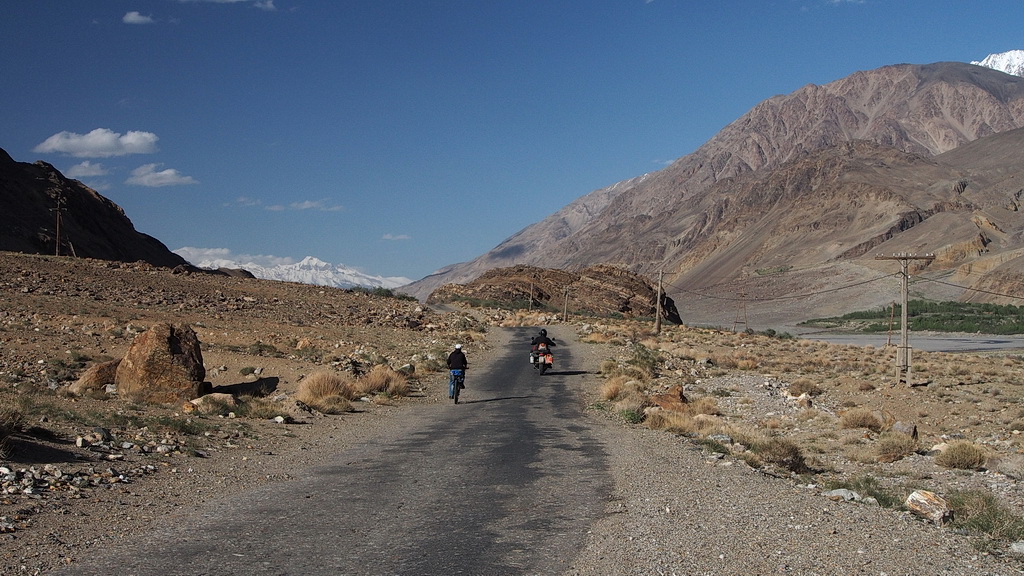 The penultimate day of the trip begins early in the morning, because a long and adrenaline-charged return journey awaits us. Again the border has to be crossed, this time from Tajikistan back to Kyrgyzstan. We hope that the customs and border controls will be carried out quickly, although we have planned enough time for this. Our tour leads again through wild, adventurous no man's land in which you can prove your skills again. The paved route begins with the Kyrgyz border post, which runs mainly downhill and takes us directly back to Osh. Now we would be back where we started, but richer with countless impressions and experiences. 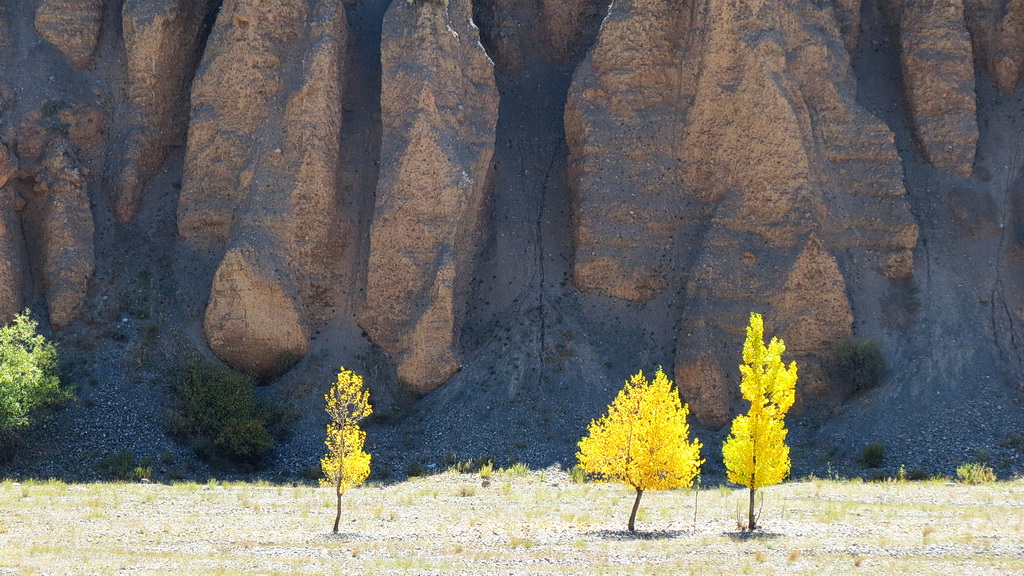 This is the end of this extraordinary bike adventure. We would be happy to welcome you soon again on one of our bike tours, maybe on another tour across Central Asia, in India or in Iran. 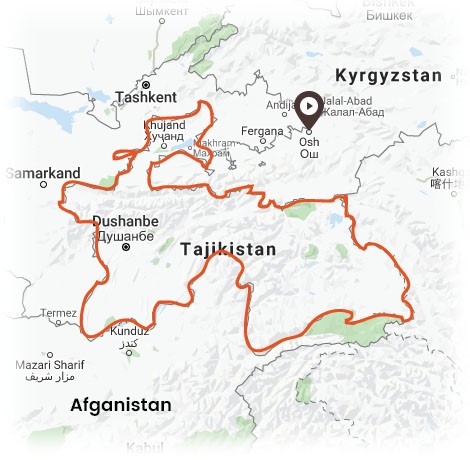 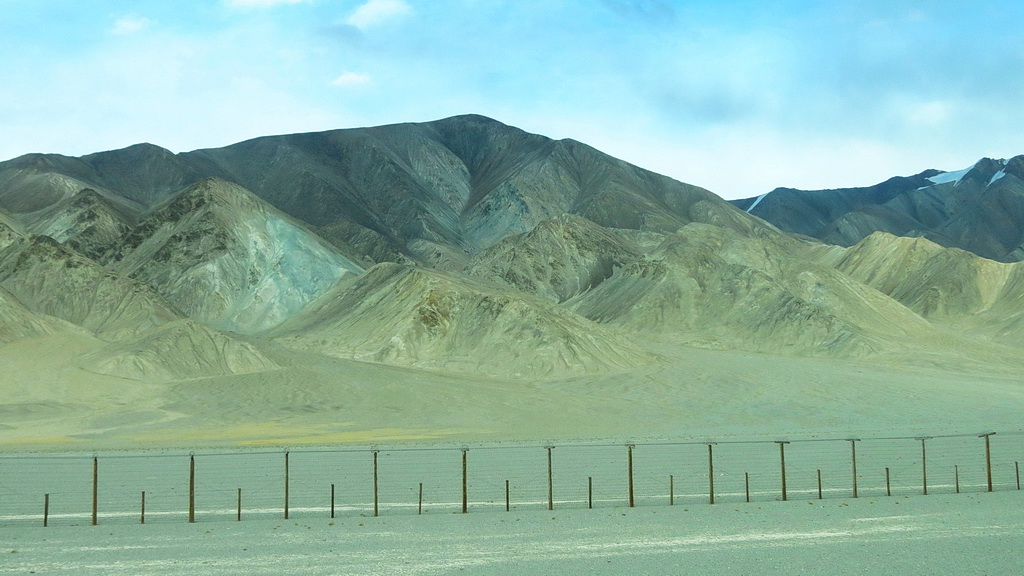 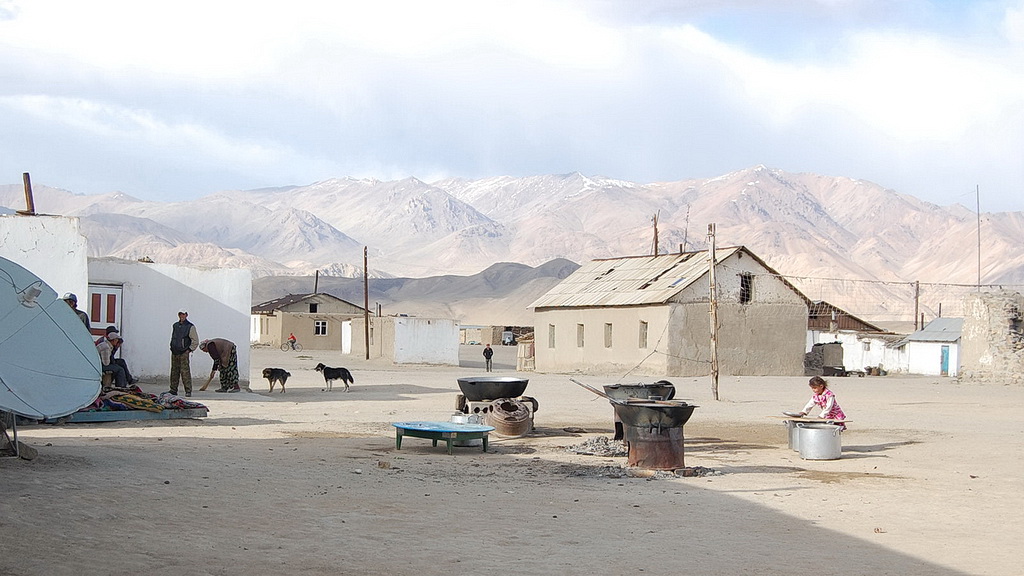 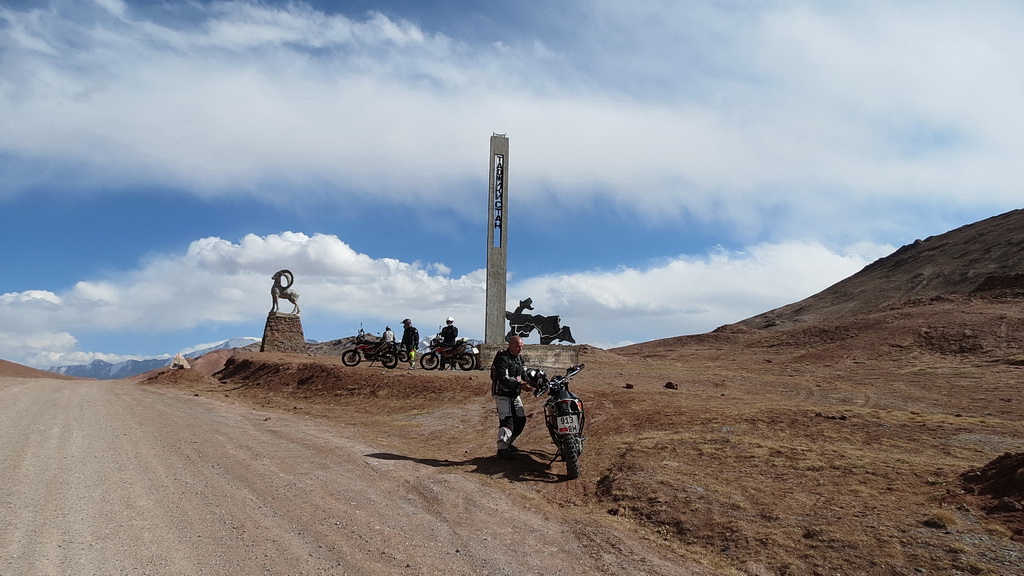 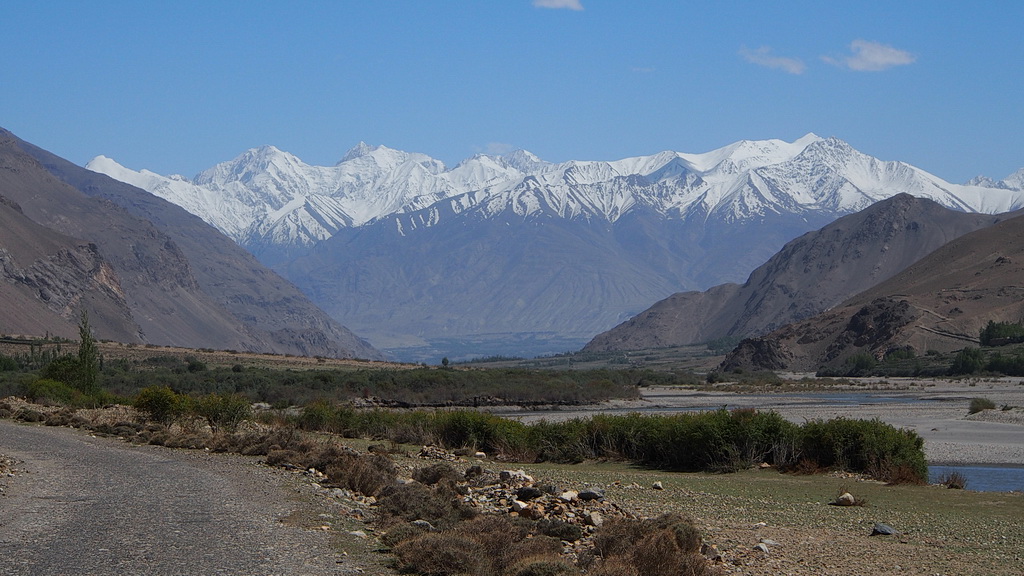 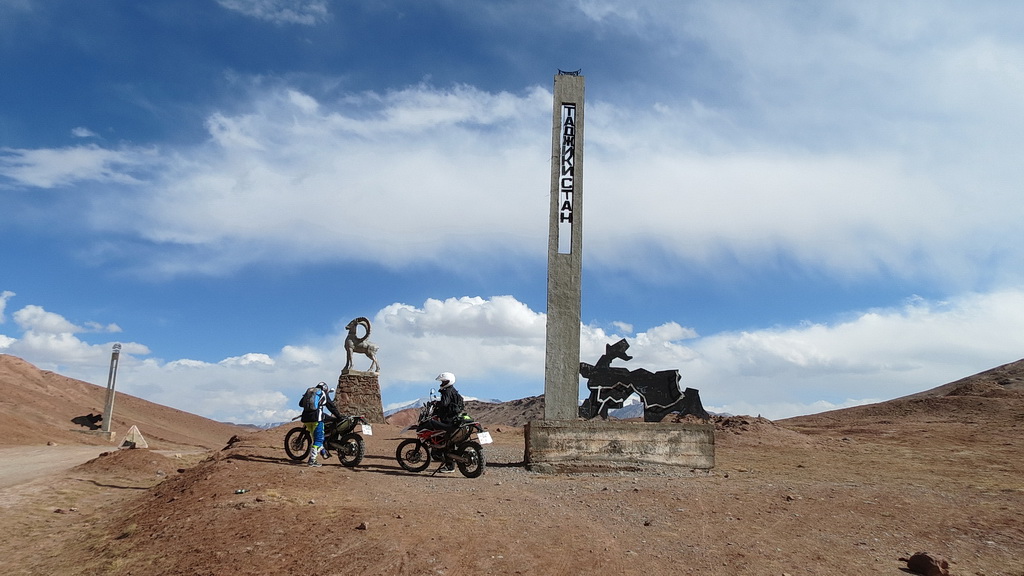 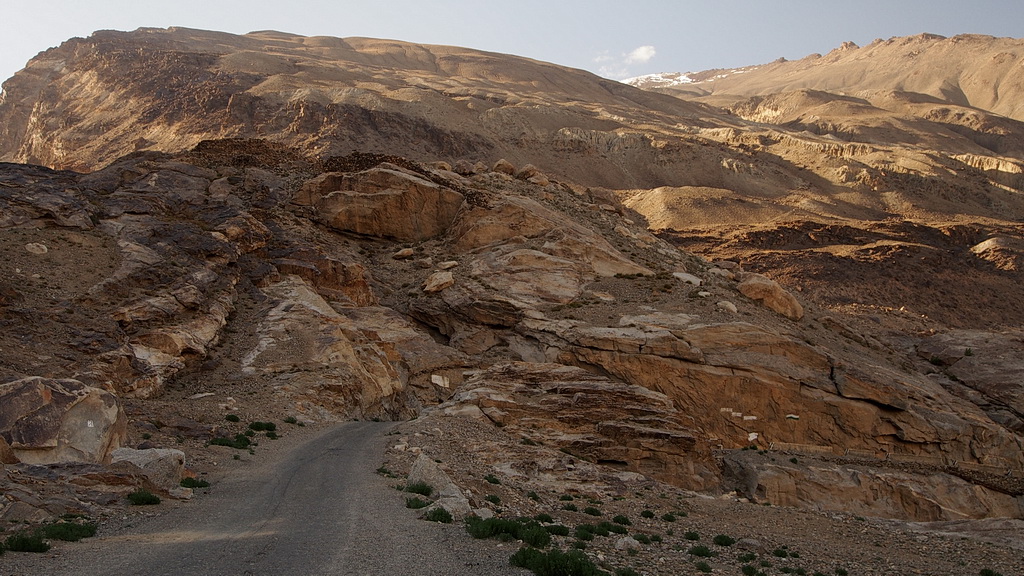 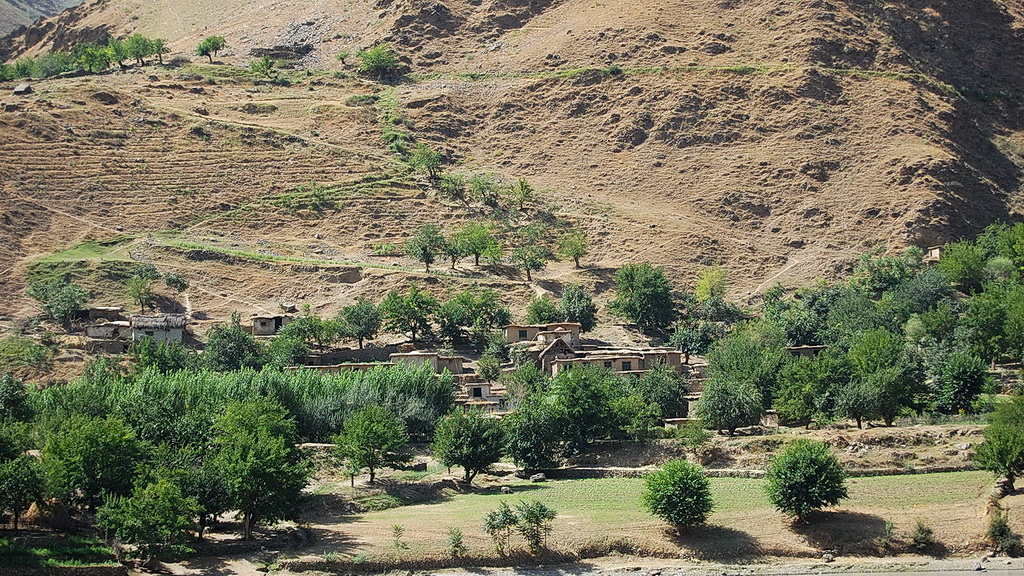 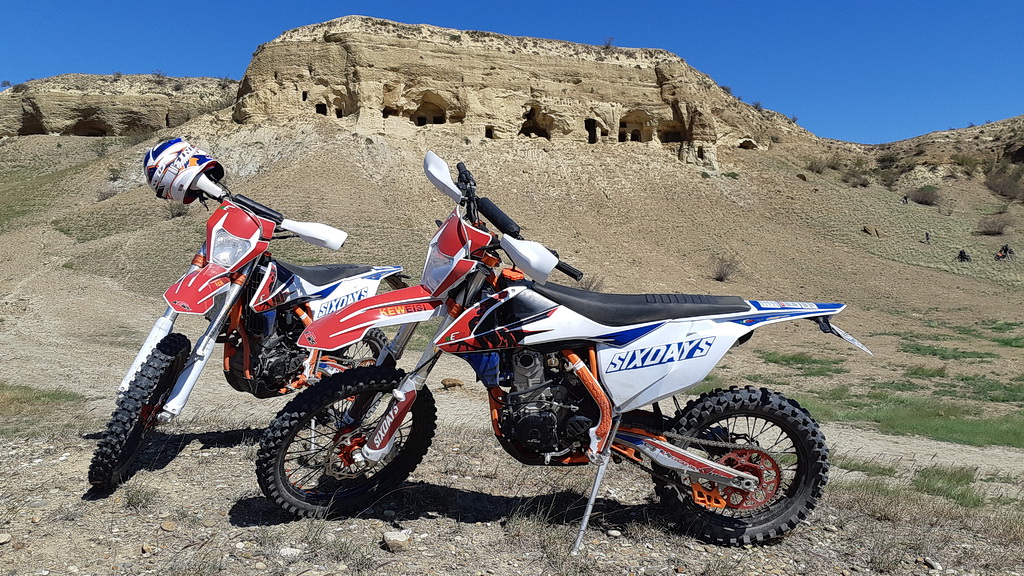 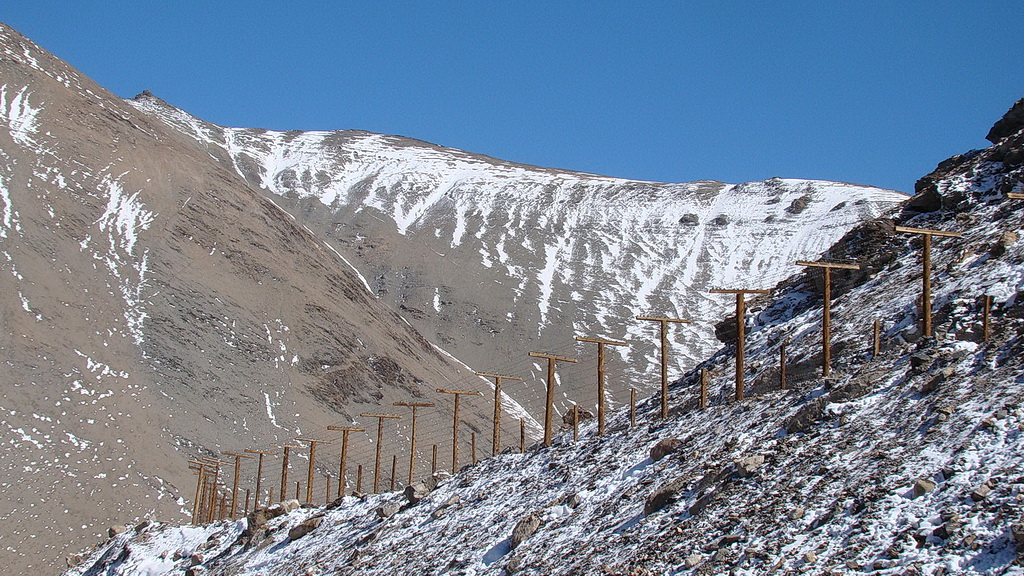 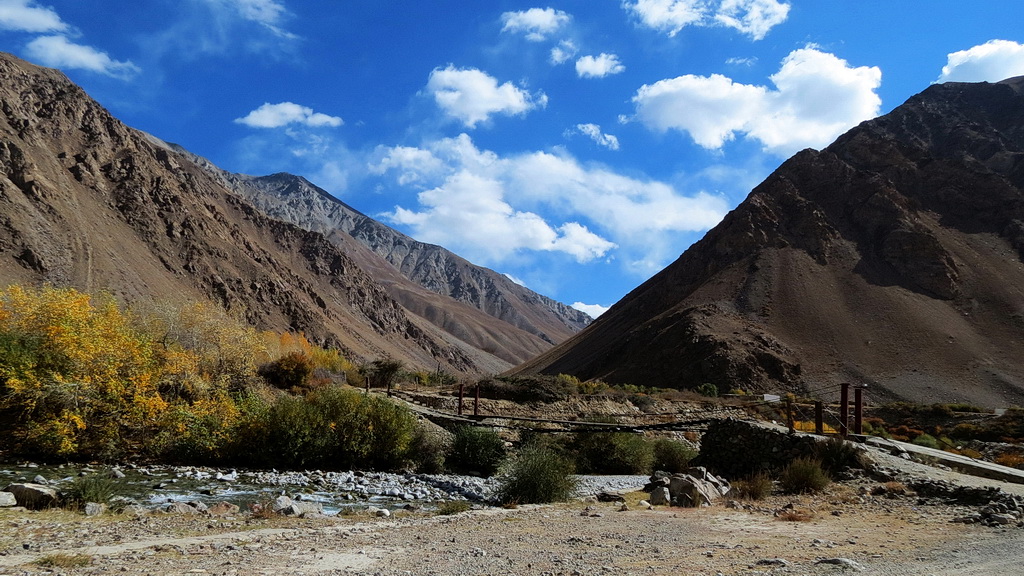