I honk, therefore I am!

India can only be loved or hated! Anyone who has been to India once and has not been deterred by the strangeness of this indescribable culture will always return there. That’s what happened to me and to this day I have a deep love-hate relationship with this country and its people.

As a student, I traveled to this huge subcontinent for the first time, back then with a backpack and public transport. Years later, 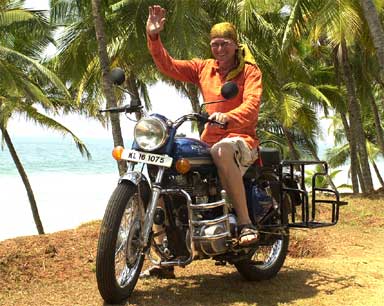 now as the IT manager of a German Internet company, I had the opportunity to spend a year in Gujarat on business. Then I fulfilled a long-cherished wish: I bought a Royal Enfield Bullet at Premji's in Bombay and traveled south for three weeks, via Goa to Kerala.

It was on this trip that the business idea for "Wheel of India" arose. I switched from IT specialist to tour operator for guided motorcycle tours. Since then I have "experienced" the southern states of Kerala, Tamil Nadu and Karnataka many times with my guests, have driven our bikes high up to Ladakh and Garhwal in the Himalayas and have immersed myself in them The fairy tale world of the Thousand and One Nights in Rajasthan.

India is not an easy country for the traveler. The confusing contradictions that one encounters at every turn leave no one untouched: extreme poverty next to splendid witnesses of the past, deepest religiousness next to apparent indifference to pollution and misery. If you meet and compare India with our European standards of values, misunderstandings and irritations are inevitable. The traveler is well advised to initially absorb this world without prejudice and then to judge it. Anyone who opens up to this country and its people and absorbs the diverse scents, colors and sounds with all their senses will definitely return home enriched.

This could be the motto of every Indian road user. The noise and chaos on India's streets surpass anything that the orderly Western European can imagine. There is only one law and that is the law of strength. A clear, simple hierarchy is derived from this.

Trucks and buses are right at the top, followed by cars and the numerous three-wheeled auto rickshaws. Only then, quite far down, are scooters, mopeds and motorcycles. At the bottom of the scale, you'll find bicycles and pedestrians, essentially unrestricted and condemned to jump out of the way of the others.

And yet, or perhaps because of that, India is the ideal motorcycle country. Once you have understood how this chaos works and learned

to swim with the flow and enjoy the new, unfamiliar freedom, biking through the endless expanses of this sun-drenched continent becomes pure pleasure.

Whether over the plateau of the Deccan, along the white beaches of Kerala, through nature parks and rainforests or high up to the peaks of the Western Ghatts or even the Himalayas - you can really explore this country by motorcycle.